Marijuana Stocks Selloff After US Elections

Marijuana Stocks haven’t risen much after the U.S. Elections and the win by Donald Trump.
The five states have voted on full legalization, while four other states could legalize medical marijuana.
Here are the results: California, Massachusetts, Maine and Nevada have voted to legalize recreational marijuana in their states, while Arizona rejected its measure.  Four other states — Arkansas, Florida, Montana and North Dakota — passed ballot measures legalizing medical marijuana.    A recent poll suggests a majority of Americans support the legalization of Marijuana, now with these new states voting in favor of marijuana reform and legalization we could be on the way toward a majority of citizens living in a state that allows for some form of legal marijuana. 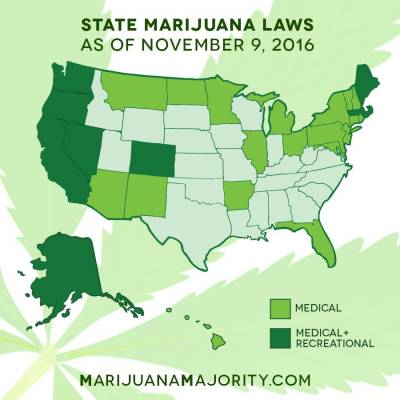 We recently wrote an article that was published on Stockhouse about our thoughts on the US Elections and its impact on the marijuana stocks.   In the article, we suggested that the US MJ stocks may sell off on the news about the elections, so far on the day after the elections; many of the stocks are not moving up higher in price, some are stuck in a topping pattern.

Looking at many of the companies we follow, the stock prices have sold off slightly or the same price range as the last few days trading.   With the various states passing their marijuana reforms legislation during yesterday’s election, you would think the markets would react much more favourably and start breaking out to new highs, that doesn’t seem to be happening.   Could the recent rise in stock prices over the last few months already have taken into account the positive outcome of the marijuana legislation in these states?  We believe so.

You can see various publicly traded company stock prices, charts, news and additional info about them from the #IMJ company directory listing, many have an interactive stock chart that provides historical information and allows you to perform technical analysis on the charts.

The fact is, the positive outcome from legalization in these various states are probably baked into the cake, the markets have already factored that into stock prices as many polls leading up to the elections have shown a good indication on what way that state will vote.

The risk now comes in the actual making of the laws and how the state will control the legalization process.  This will create uncertainty in the market and it may give back some or most of the recent gains, a correction in the recent parabolic rise is most likely coming, then followed by a basing period before the next advance will be made.

As an investor, you may want to take some profits recently made, wait for the correction and then buy selective high quality companies that are already generating revenues and have room to grow. Ones in the ancillary and other verticals have a potential to continue growing over the next few months and into next year.  Any company that has to operate within the new guidelines and regulations coming from these various states  still makes the sector and the companies unclear as to their potential.  As the gov’ts create the framework for legalization in their state, the companies growing and dispensing still may be questionable until new licenses are given or the existing companies are grandfathered to continue operating.  What I am suggesting is that there is still some uncertainty around the new rules and regulations, until the framework is in place, some of the companies still do have risk associated to them and the markets hate uncertainty.

This will be a great time for investors to buy the dips and trade within a new trading range that is going to be established over the coming months.  We will look at the new trading range, company valuations and analyze the companies we feel are going to excel over the coming months and years.   Sign up for the Invest In MJ Newsletter to stay informed and educated on the various opportunities in the MJ sector and companies involved.