Investors should be cautious about Canadian Cannabis Stocks

Contributed to The Globe and Mail - Published Monday, Nov. 02, 2015 5:00AM EST
Anthony Wile is chief editor of the economic and investment newsletter The Daily Bell and chief investment strategist of High Alert Investment Management.

The election of Justin Trudeau’s Liberals has had an immediate impact on the investment marketplace, with a rush to invest in the handful of publicly traded Canadian medical marijuana startups – all on the promise of legalization of recreational marijuana use.

However, as with any burgeoning new industry, including the Canadian cannabis industry as it “whitens” from its previous black-market status, investors considering directing their capital there may want to take a temporary respite from hitting the go button.

Investors who make assumptions today about what may be profitable tomorrow will likely find their wallets considerably lightened by a changing set of regulatory circumstances.

While a legalized cannabis industry means a substantial increase in potential profitability for the industry leaders already invested in the marketplace, for all investors the key questions are: What will that new landscape look like? How will the industry be regulated, structured and taxed? And, most importantly for the new or individual investor – how best to navigate the marketplace?

US Govt Owns The Patent On Some Cannabis Cures Could it be true, does the U.S. Government own a patent on some Cannabis Cures?

Yes it does seem like this is a reality.

Marijuana remains a scheduled I drug and is included with the likes of heroin, LSD, ecstasy, meth and peyote.  Thus Cannabis has been classified as having a "high potential for abuse" and having "no currently accepted medical use'.  Ironically, there is a patent for "Cannabinoids as antioxidants and neuroprotectants" which has be in effect since October 7, 2003 and it is assigned to none other than... you guessed it,  The United States of America as represented by the Department of Health and Human Services (Washington, DC).

So while maintaining the stance that Cannabis is harmful to our health and has no medicinal value, the corporation of The United States of America over a decade ago has been assigned the patent for cannabis as a antioxidants and neuroprotectants.  Here is the Abstract about the patent:

Cannabinoids have been found to have antioxidant properties, unrelated to NMDA receptor antagonism. This new found property makes cannabinoids useful in the treatment and prophylaxis of wide variety of oxidation associated diseases, such as ischemic, age-related, inflammatory and autoimmune diseases. The cannabinoids are found to have particular application as neuroprotectants, for example in limiting neurological damage following ischemic insults, such as stroke and trauma, or in the treatment of neurodegenerative diseases, such as Alzheimer's disease, Parkinson's disease and HIV dementia. Nonpsychoactive cannabinoids, such as cannabidoil, are particularly advantageous to use because they avoid toxicity that is encountered with psychoactive cannabinoids at high doses useful in the method of the present invention. A particular disclosed class of cannabinoids useful as neuroprotective antioxidants is formula (I) wherein the R group is independently selected from the group consisting of H, CH.sub.3, and COCH.sub.3. ##STR1##

If you are interested in reading more about this patent and what it entails, here is the link to United States Patent # 6630507, Cannabinoids as antioxidants and neuroprotectants.

What are your thoughts, should the United State of America have he rights to this patent? 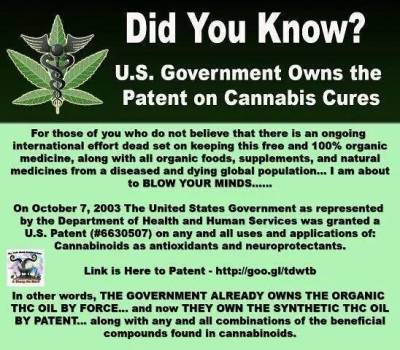 Tweed, one of Canada's first medical cannabis producers, recently renamed Canopy Growth Corporation, has opened a dispensary in Guelph. The storefront now known as Better by Tweed, opened Oct. 15 and is the town’s first dispensary.

In September, Tweed purchased MedCannAccess a company focused on helping new medical marijuana patients and acquired the group’s three community access centres in Guelph, Hamilton and the Greater Toronto Area. The Hamilton location opened earlier in the week and Better by Tweed will soon expand with the Etobicoke Better Centre.

The MedCannAccess locations had helped cannabis patients register with a licensed producer.

The Better by Tweed operation will provide patients with information packages to bring to their doctors to fill out and then return to the store where they can place orders for cannabis from Tweed’s production facilities in Smiths Falls, Toronto and Niagara-on-the-Lake.

“There will always be a market for medical marijuana, and, if the time comes, we’re well equipped for recreational use as well,” said Tweed president Mark Zekulin.

Historic Cannabis Deal Between the Suquamish Tribe and Washington State

A historic deal between the Suquamish Tribe and the State of Washington was recently signed and entered into.  It allows a Native American Tribe to cultivate, process, and sell marijuana within a state’s highly regulated marijuana system.  While the Tribe’s own marijuana regulations have not been disclosed to the public, this does set a precedence and we expect more Native American tribes will follow suite in various States around the US and in other countries like Canada.

The Washington State Liquor and Cannabis Board negotiated the compact with the Suquamish Tribe on behalf of the state. In the compact, the state gives its own interpretation of the Wilkinson statement, writing that “[t]hat memo effectively treats tribal governments the same as state governments in the decision to legalize marijuana.”

Hilary Bricken’s provides her analysis, “The Suquamish Marijuana Compact: First in the State, First in the Nation”:  http://www.cannalawblog.com/the-suquamish-marijuana-compact-first-in-the-state-first-in-the-nation/

MassRoots Files Application For Listing To The NASDAQ Capital Market

MassRoots has demonstrated tremendous growth in recent quarters, more than doubling its userbase since the beginning of 2015 to a half million users. The Company recently started monetizing its digital properties and is expecting to rapidly scale its revenues over the next several quarters. Sitting at the intersection of cannabis and mobile technology, MassRoots offers a direct play on the regulated marijuana industry without ever touching the plant itself.

“Uplisting to the NASDAQ Capital Market would be a significant milestone not just for MassRoots, but the cannabis industry as a whole,” stated MassRoots Chief Executive Officer Isaac Dietrich. “We believe that uplisting to a national exchange like the NASDAQ would enable MassRoots to attract a broader range of institutional investors, increase share liquidity and help shift the paradigm about investing in the regulated marijuana market.”