"We're pleased to have Robin bring her wealth of experience to Blue Line," said Sean Campbell, Blue Line Protection Group's Chief Executive Officer. "Not only do our clients face never-ending revisions to complicated regulations, but they have the incredible burden and time pressure of counting and re-counting cash and accounting for its movements. Robin's expertise will help ensure our clients are able to respond to all reporting requirements of state and federal licensing and regulatory agencies."

BEVERLY HILLS, CA--(Marketwired - May 26, 2015) -  mCig, Inc. (OTCQB: MCIG), a leading provider of technology, products, and services for consumers, dispensaries, and growers within the global medical and recreational marijuana industry, announced on Tuesday, May 26, 2015 the plan to open a Southern Colorado Cultivation and Extraction Facility. The Extraction Division will oversee the operation of the facility, cultivating and extracting a world-class product for legal consumers in Colorado, allowing mCig to create another stable revenue stream in the cannabis extraction industry, which some analysts predict will reach $47B in revenue in 2016. The blueprint for this pilot facility will also be easily duplicated in other locations. In addition to the plan, mCig announced the completion of an agreement with Denver-based Master Grower and Cannabis Entrepreneur Derek DeCosmo to serve as a Key Partner and consultant for the upcoming Cultivation Facility. Mr. DeCosmo will also be responsible for providing logistical support for the Extraction portion of the Facility.

Mr. DeCosmo has over a decade of professional growing experience as well as an extensive network of farmers and dispensaries across the state from which to pool resources. Mr. DeCosmo has worked with Personal Organic Therapies in Denver in the past, and is extremely excited to be involved with the mCig Southern Colorado Operation. Mr. DeCosmo commented, "When Mike Snody (mCig's Chief Research and Development Officer) laid out the master plan and invited me to join this operation, I was immediately on board. I am putting 100 percent of my energy into ensuring the success of the Southern Colorado Operation. I grow the most potent, highest quality strains, and I'm constantly pushing the envelope, and I look forward to putting that knowledge and experience to work for mCig in Colorado. I have access to the absolute best, award-winning cuts and world-renowned strains in the world which we will use to create the finest concentrates available on the planet." The Southern Colorado facility will allow the Extraction Division to field test the upcoming Supercritical Co2 Extractor.

RENO, NV--(Marketwired - May 27, 2015) - INTERACTIVE HEALTH NETWORK (OTC PINK: IGRW), a health company specializing in advances in Supplements for Health and Anti-Aging today announces the formation of three new divisions for focus and execution under the guidance of their recently announced CEO Cesar Vazquez:

The Indoor Garden/Hydroponics Division will focus on marketing and selling a line of private labeled proprietary products including, but not limited to, light hoods, ballasts, grow bulbs, fans and nutrients. "We plan on launching a very cost effective line of product that leverages my years of real world experience in world class hydroponic products marketed and sold in both our physical retail location and online ecommerce. This market is explosive in growth and in a known need for high quality, but cost effective equipment and optimized nutrients" stated Cesar Vazquez, CEO of Interactive Health Network.

The Drug Enforcement Administration (DEA) is proposing to adjust the established 2015 aggregate production quota for marijuana.  While marijuana is a scheduled I drug and the laws around it are enforced by the DEA, they do allow several government agencies and registered manufacturers to produce it for research and product development.

Registered manufacturers and the National Institute on Drug Abuse (NIDA) have requested a higher quota for production and supply of marijuana for 2015.  The previous 2015 established quote for marijuana was 125,000 g, and the new adjusted quota for 2015 is 400,000 g.

Highlights from the Federal Register Notice:

In proposing the adjustment, the Administrator has taken into account the following criteria in accordance with 21 CFR 1303.13: (1) Changes in demand for the basic class, changes in the national rate of net disposal for the class, and changes in the rate of net disposal by the registrants holding individual manufacturing quotas for the class; (2) whether any increased demand or changes in the national and/or individual rates of net disposal are temporary, short term, or long term; (3) whether any increased demand for that class can be met through existing inventories, increased individual manufacturing quotas, or increased importation, without increasing the aggregate production quota; (4) whether any decreased demand will result in excessive inventory accumulation by all persons registered to handle the class; and (5) other factors affecting the medical, scientific, research, and industrial needs of the United States and lawful export requirements, as the Administrator finds relevant.

Analysis for Adjusting the Established 2015 Aggregate Production Quota for Marijuana:

Since the establishment of the initial 2015 aggregate production quotas, the DEA has received notification from DEA registered manufacturers that research and product development involving cannabidiol, is increasing beyond that previously anticipated for 2015. The associated product development activities are related to process validation and commercialization activities, including qualification activities related to potential U.S. Food and Drug Administration submission support.

Additionally, the DEA has also received notification from the National Institute on Drug Abuse (NIDA) that it required additional supplies of marijuana to be manufactured in 2015 to provide for ongoing and anticipated research efforts involving marijuana. NIDA is a component of the National Institutes of Health and the U.S. Department of Health and Human Services which oversees the cultivation, production and distribution of research-grade marijuana on behalf of the United States Government, pursuant to the Single Convention on Narcotic Drugs (March 30, 1961, 18 UST 1407).

The Administrator Michele M. Leonhart, therefore, proposes to adjust the 2015 aggregate production quotas for difenoxin, diphenoxylate (for conversion), and marijuana, expressed in grams of anhydrous acid or base.

You can read the full Notice by the DEA and provide your opinion as they are requesting comments.

Sign up for our newsletter to get the latest marijuana industry news and opportunities sent to you directly.

Marijuana Is Polling Better Than Candidates For The 2016 Election

For a while now we have been excited about the legal Cannabis sector and the opportunities for investments seem endless.  Over a year ago, we started covering the marijuana sector at Invest In MJ and it has been interesting watching the politicians finally taking a serious look at their stance on marijuana.

It wasn’t too long ago that marijuana was a taboo subject and that most politicians didn’t want to broach the subject let alone provide their stance or political views on it.   Most career politicians opposed the idea of marijuana legalization because it didn’t get them votes or the lobbyist were very successful in their efforts to keep  cannabis classified as a schedule I drug.  Without actually doing any real research on marijuana or seeking out the truth on its medicinal benefits, they still hold the notion that cannabis is a gateway drug and that it should remain illegal.  The ignorance in DC is astounding or its just plain criminal that they still want to maintain control over the masses by making a plant illegal.  However they are losing The War Against a Plant and the debate is about to heat up in 2015 and 2016.

In a recent article and poll posted on The Washington Post, we can clearly see that Weed is polling better than the entire field of candidates for the 2016 elections.  While Hillary Clinton and Jeb Bush may be the leading candidates when it comes to favourability ratings, medical marijuana is clearly the leader and recreational marijuana still beats out these contenders.  With over 80% in favor of medical marijuana and just over 50% for recreational, Ohio, Pennsylvania and Florida have spoken and they are more in favor of marijuana than they are of the various candidates.  If this poll of the three key swing states is any indications of what people want, I am sure US citizens would vote in favour of medical marijuana over any politician… that is if Med MJ was on the ballet.

While the dysfunctional US gov’t may never address the real issues and problems it creates (endless wars, highest incarceration rate in the world, being a bankrupt country and the flaws of central banking), it may have to address marijuana as a Schedule I drug.  Obama has opened up the doors towards legalization and he recently commuted the sentences of 22 drug offenders which marks the largest of such “pot pardons” since he took office.  Obama had issued 21 commutations and 64 pardons over the course of his presidency while his predecessor George Bush commuted only 11 sentences.  The question is… will the new candidates close the doors on marijuana legalization once they get into power or leave it open and allow the masses to walk through without being criminalized.

While medical marijuana will never be on the 2016 ballet (even though it should be since it is what people want); it sure will become one of most talked about topics in the coming years.  We believe medical marijuana will be one of the hottest topics of debate for this up and coming election. However, if we truly lived in a democratic world, we should be voting on topics that matter and what the people really want.  Instead we are stuck having to select one political party or another, both of which seek power to advance their master’s agenda and not addressing the wishes of the masses.

Should marijuana be legalized and would you vote for it?  Let us know what you think. 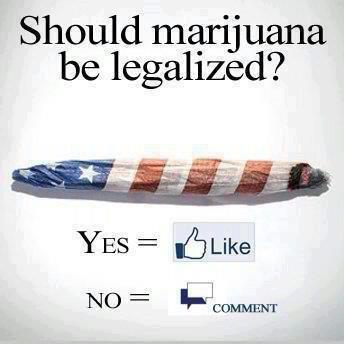 Sign up for our newsletter to get the latest marijuana industry news and opportunities sent to you directly.