Emblem Corp. is a leading marijuana producer, which has the potential to generate over $100 million in revenue, led by a team of Health Care & Pharma Executives who have built & run multi-billion dollar companies.

Emblem has a clear strategy across three verticals of marijuana production, patient education, and pharmaceutical production and is uniquely positioned within Canada’s large and growing medical and recreational marijuana industry. With a state-of-the-art production facility in Paris, Ontario up and running, Emblem has a planned expansion that will allow for a total production capacity of up to 16,000KG annually.

The companies Pharmaceutical Division is led by John Stewart, ex CEO at Purdue Pharma, the largest private pharmaceutical company in the world. Under his leadership he developed and launched to market OxyContin, a $2 billion a year drug.  His focus will be replacing chemically based opioids with natural based Medicinal cannabis.

PARIS, ONTARIO--(Marketwired - March 10, 2017) - Emblem Corp. (TSX VENTURE:EMC) ("Emblem" or the "Company") is pleased to announce that it has retained the consulting services of Nate Nienhuis for its Canadian cannabis operations.

Gordon Fox
Co-founder & CEO – Emblem Corp.
Former partner at Goodman & Carr LLP from 1979 to 1995, where he practiced securities law. Co-founder of White Cedar Pharmacy, a pharmacy serving over 2,600 patients in Ontario. Founder of Lytton Capital in 1995, a Limited Market Dealer, and invested $1,350,000+ into Emblem.

Maxim Zavet
Co-founder & President – Emblem Cannabis
Founding partner of Levy Zavet PC. Extensive knowledge for the MMPR and the Cannabis Industry in Canada. In-depth knowledge of medical marijuana with an extensive network of contacts around the world and invested $900,000+ into Emblem 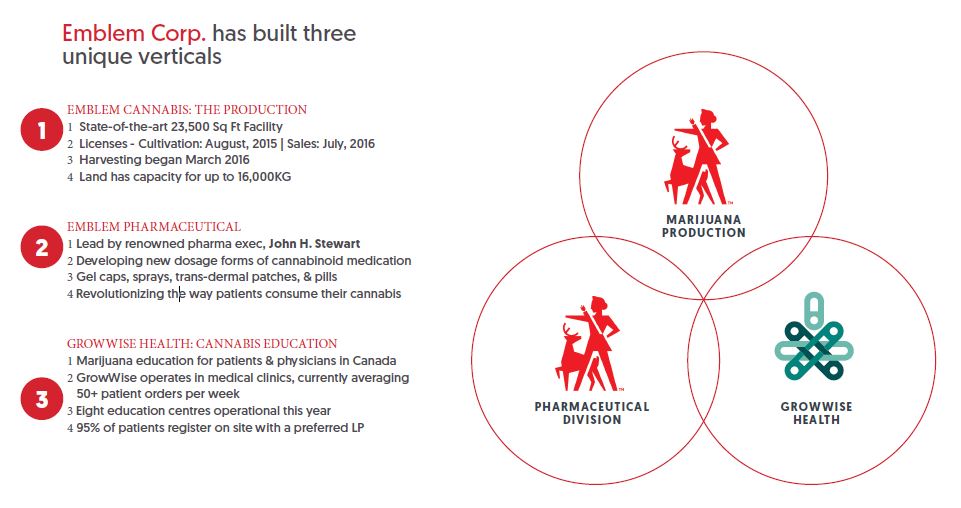 Emblem Corp. (TSXV:EMC) (EMC.WT) (“Emblem” or the "Company") announced today that it has entered into a Collaboration and Licensing Agreement (the “Agreement”) with Canntab Therapeutics Limited (“Canntab”) of Toronto. Canntab has developed a patent-pending oral sustained release formulation for cannabinoids (the “Sustained Release Product” or the “Product”). Under the Agreement, Emblem and Canntab will collaborate on the preclinical formulation, clinical development, regulatory approval, manufacturing and commercialization of the Sustained Release Product.

The Agreement grants to Emblem the exclusive right in Canada to Canntab’s patents and know-how for the purpose of developing, commercializing, using, selling, and offering the Sustained Release Product for sale under the Emblem brand. The License does not include the right to import or export the Product.

The Sustained Release Product will be manufactured by Emblem or by Canntab, after Canntab receives appropriate licensing allowing such manufacture.

Emblem and Canntab also intend to collaborate on the preclinical formulation, clinical development, regulatory approval and commercialization of a range of additional cannabinoid containing pharmaceutical formulations.

There is substantial evidence that cannabinoids are effective for the treatment of a number of conditions including (i) chronic pain (ii) nausea, (iii) anxiety and sleep disorders, and (iv) spasticity in patients with Multiple Sclerosis.

Most conventional (immediate release) dosage forms, such as tablets and capsules, release the active drug component immediately after oral administration. In the formulation of conventional drug products, no deliberate effort is made to modify the drug release rate. Sustained release dosage forms are designed to release the active pharmaceutical ingredient at a predetermined rate in order to maintain a constant drug concentration over a specific period of time – resulting in a longer duration of action from a single dose and often with reduced side effects. Generally this is done to achieve an improved therapeutic outcome and/or to enhance patient compliance. Immediate release dosage forms of cannabinoids tend to lose therapeutic effects in 4 to 6 hours requiring subsequent re-administration and the risk of reduced patient compliance.

The Sustained Release Product is designed to release the cannabinoid content over a period of at least 12 hours. Sustained release formulations of pharmaceutical products are particularly valuable in the treatment of chronic conditions, such as chronic pain, where patients tend to need “around the clock” relief. There is substantial evidence that cannabis is effective for the treatment of numerous conditions including neuropathic pain. Neuropathic pain is estimated to affect over two million Canadians and the pharmaceutical market addressing the needs of those patients was about $500 million in 2016.

John H Stewart – Head of Emblem’s Pharmaceutical Division said: “There are numerous examples of drug products where the utilization of advanced dosage forms such as sustained and/or modified release dosage forms significantly improved the efficacy and clinical utility of the active drug substance. We believe that cannabinoid therapy will be advanced via the development of such dosage forms and the associated pharmacokinetic and clinical research. Sustained release formulations of pharmaceutical ingredients that are otherwise short-acting (such as cannabinoids) have more convenient dosage schedules, a longer duration of action and tend to be much more accepted by patients and healthcare professionals. Emblem expects that the introduction of easily titratable, sustained release formulations of cannabinoids will materially increase the market for cannabinoid-based medications, particularly for treatment of conditions such as chronic neuropathic pain.”

Jeff Renwick, Canntab CEO said: “We’re excited about the collaboration between us and Emblem. It is a testament to the medicinal delivery technology developed by our team at Canntab. It also allows us to bring to the Canadian market a significant advancement in Cannabis based medicine. Canntab’s patent-pending extended release formulation for the first time lets doctors establish the appropriate dosage for their patients and will make taking medicinal cannabis easier for patients, which should translate into higher patient compliance, making for more effective treatment. The ongoing relationship with Emblem allows for further development of our unique platforms, advancing our mission to put the “medical” into medicinal cannabis.”

Gordon Fox, CEO of Emblem said: “We are very excited about our relationship with Canntab. We expect the Sustained Release Product to have a major impact on the Canadian medical cannabis market. We are also looking forward to further collaborations with Canntab to bring other ground-breaking cannabis based advanced dosage forms to the market.”

Emblem is licensed under the Access to Cannabis for Medical Purposes Regulations (the “ACMPR”) to cultivate and sell medical marihuana. Emblem carries out its principal activities producing marihuana from its facilities in Paris, Ontario pursuant to the provisions of the ACMPR and the Controlled Drugs and Substances Act (Canada) and its regulations.

Canntab Therapeutics Limited is a Canadian cannabis oral dosage formulation company based in Markham Ontario, engaged in the research and development of advanced pharmaceutical grade formulations of cannabinoids. Canntab has developed in-house technology to deliver standardized medical cannabis extract from selective strains in a variety of extended/sustained release pharmaceutical dosages for therapeutic use. Simply put, Canntab's mission is to put the "Medical" into medicinal cannabis!

PARIS, ONTARIO--(Marketwired - March 10, 2017) - Emblem Corp. (TSX VENTURE:EMC) ("Emblem" or the "Company") is pleased to announce that it has retained the consulting services of Nate Nienhuis for its Canadian cannabis operations.

VANCOUVER, BC--(Marketwired - October 14, 2016) - Saber Capital Corp. (TSX VENTURE: SAB.H) ("Saber" or the "Company") and Emblem Corp. ("Emblem") are pleased to announce, further to news releases of May 5, 2016 and August 29, 2016, the details of the proposed debt and equity financings (the "Financings") to raise a minimum of $23,500,000 in connection through Saber's qualifying transaction with Emblem (the "Qualifying Transaction"). The Financings consist of the following:  Read the Full press Release

#IMJ Note: If you are interested in participating in the Emblem Financing, please contact Danny at Investor Relations or contact us and we will forward it.  You can also ask us for our special report and coverage on Emblem.

Watch our latest interview with Early Investing where we discuss the outlook for the Cannabis sector including some of our thoughts on Emblem. <a tit

Be the first to review this listing!